SPRING has sprung on the Isle of Slingers.

Skylarks drop and bob. Seagulls skim the glassy sea. Birdwatchers wait for puffins at Pulpit Rock. Families cluster round the lighthouse, and trail off for ice-cream. 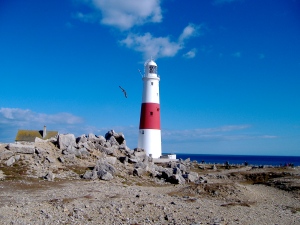 The island is boiled and licked clean at the edges by a clear blue sea. We find caves, gaping and silent. One has a hole in the roof, criss-crossed with railway sidings to stop people falling in. We lean and look, high over queasy waters. We feel a bit sick.

Ancient boat hoists tower over tiny, craggy inlets. We clamber down to where the limestone is sanded down, creamy smooth. 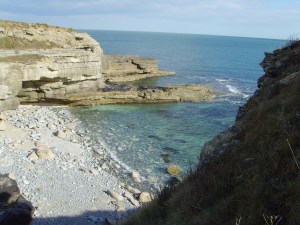 We pass rows of beach huts, more like sheds than chalets. Some of these modest little boxes are on sale for between £30,000 and £45,000, according to local estate agents. 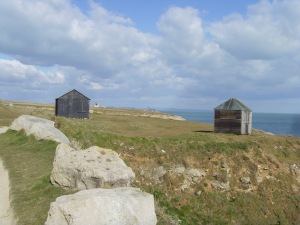 Trotting past the discoloured teeth of disused quarries, we cross the island from east to west. A winding track leads us past the ‘lawns’, long slices of meadows carved out by the Saxons and marked by dry stone walls.

Sunshine twinkles and bounces off Lyme Bay, flanked by the yellow stripes of Chesil Beach.

We sit outside the Pulpit Inn. Fishing trawlers drift past coastguard cottages, snaking in safely past The Race, tumbling warily over the Shambles sandbank.

How unchanged is Portland from the place described by Thomas Hardy nearly 100 years ago… “To those who know the rocky coign of England here depicted – overlooking the great Channel Highway with all its suggestiveness, and standing out so far into mid-sea that touches of the Gulf Stream soften the air till February – it is a matter of surprise that the place has not been more frequently chosen as the retreat of artists and poets in search of inspiration – for at least a month or two in the year, the tempestuous rather than the fine seasons by preference.”

2 thoughts on “Skylarks on Portland”